What is MacBook Air?

The MacBook Air is a line of Macintosh ultraportable notebook computers from Apple Inc. It allows users to play blu-ray files, blu-ray discs on it so as to experience the most wonderful blu-ray home cinema effects. The Air is a very light and thin structure and it’s available in two sizes: 13.3-inch and 11.6-inch. MacBook Air sits below the thicker and higher-performance MacBook Pro in the Macintosh product line; MacBook Air has become Apple's entry-level laptop due to the discontinuation of the white MacBook as well as lower prices on subsequent iterations of the MacBook Air. In recent years the MacBook Air has become the best-selling Macintosh computer and the best-selling ultraportable laptop credited with revolutionizing lightweight yet powerful laptops known as Ultrabooks. 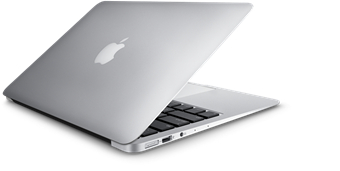 The 11-inch MacBook Air lasts up to 9 hours between charges and the 13-inch model lasts up to the incredible 12 hours. That’s the difference between a notebook that only has the features of being thin and light and one that has much more power.

Fourth-generation Intel Core processors with Intel HD Graphics 5000 are up to whatever the task. From editing photos to browsing the web, everything happens ultrafast while uses less energy. And all that power is encased in an incredibly thin 0.68-inch unibody design that weighs only 2.38 pounds.

With the latest 802.11ac technology, MacBook Air takes Wi-Fi speeds over the top. Connect to an 802.11ac base station and experience wireless performance up to 3x faster than the previous generation of Wi-Fi. 802.11ac also delivers expanded range, which enables you to work more freely than ever.

Flash storage in MacBook Air is up to 9x faster than a 5400-rpm notebook hard drive. So everything you do is snappy and responsive. MacBook Air also wakes up fast thanks to flash storage and fourth-generation Intel Core processors.

iPhoto, iMovie, GarageBand, Pages, Numbers, and Keynote, all are equipped on every new Mac; you also get great apps for email, surﬁng the web, sending texts, making FaceTime calls and find new apps with a finding app.

OS X makes Mac works better. It features an amazing collection of apps you’ll use every day, including advanced technologies that boost performance and battery life. And iCloud makes your Mac, iPhone, iPad, and iPod touch work wonderfully together.