AC3 stands for Audio Coding 3, which is a file extension for surround sound audio files used on DVDs format. The AC3 file format was created by Dolby Labs for use in a Dolby Digital audio on DVD, Blu-ray and other digital video formats. 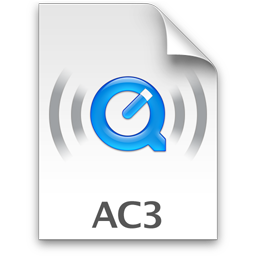 AC3 increases fidelity over its previous surround sound standard, Pro-logic, with independent tracks for each of the 6 speakers, a 16bit sampling at 48khz rate compressed by 10- 12 times, making for a total bit rate of 384kbps.

To reproduce to the full surround sound signal on an AC3 file requires a supported playback device such as DVD player connected to a Dolby Digital-supporting home theater amplifier. It is more common in computer audio for sound cards to interpret AC3 and put out a PCM stream; however some cards can output a Dolby Digital or DTS stream that may be used on a home theater amplifier.

Generally speaking, DVD's audio is AC-3 or DTS format, which is featured 5.1 surround sound. When you play and watch DVD movie through the home theater system, this multi-dimensional audio effect will make you feel the fantastic of DVD movie. Meanwhile, AC-3 and DTS audio format can also be converted and stored into video files like MPEG and AVI. When played on your media player, it can also achieve the 5.1 Dolby Digital Surround Sound.