VCD stands for Video Compact Disc, also called Video CD. It’s basically a CD that contains moving pictures and sound. A VCD is capable of holding up to 74/80 minutes on 650MB/700MB CDs respectively of full-motion video along with quality stereo sound. VCDs use a compression standard called MPEG to store video and audio. They can be played on almost all standalone DVD Players and all computers with a DVD-ROM or CD-ROM drive with the help of a software based decoder / player. The quality of a good VCD is about the same as a VHS tape based movie while VCD is usually a bit blurrier. 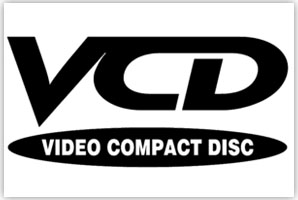 VCD was introduced in 1993 by JVC, Philips, SONY as well as Matsushita and was described in detail in the White Book specifications. Video data is demanding in terms of storage capacity; it requires approximately 5 MB of storage per second of video, which would translate to about two minutes of video on a 680 MB CD. In order to store video information on a CD in a practical fashion, the data must be compressed for storage and then decompressed for replay in real time. MPEG-1 compresses data at ratios of up to 200:1. MPEG is an international standard, and can be used by any manufacturer to create hardware for users with MPEG video, which can also be recorded on any CD. VCD formatting removes unnecessary information from MPEG-1 data, and adds specialized video authoring capabilities through inclusion of a CD-i (CD- Interactive) runtime application.

2. VCD-ROM, introduced in 1997, enables the creation of hybrid VCD/CD-ROM disc.

3. VCD-Internet, introduced in 1997, is a standardized means of linking video and Internet data.

Video CDs are not popular in the US, Canada and Europe, so its support is limited among mainstream softwares. Windows Media Player prior to version 9 and QuickTime Player do not support playing VCD directly, though they can play the .DAT files (stored under \MPEGAV for video and audio data) reliably, and plugins were available. Windows Vista added native support of VCD along with DVD-Video and can launch the preferred application upon insertion. The disc format is also supported using Windows Media Player Classic variations and VLC Media Player both support VCDs natively.

Direct access playback support is available within Windows XP MCE, Windows Vista, Windows 7, BSD, Mac OS, Linux, and Darwin, among others, either directly or with updates and compatible software.

Disc playback is also available both natively and as an option on some CD- and DVD-based video game consoles, including PC-FX, Sega Saturn (pictured right), Sega Dreamcast, and Sony PlayStation.

Most DVD players are compatible with VCDs, and VCD-only players are available throughout Asia and online through many shopping sites. Some Blu-ray and HD-DVD players also retain support, as do CBHD players as well.