MPEG refers to Motion Picture Experts Group (or Moving Picture Experts Group). It’s a group of experts formed by ISO and IEC to set standards for audio and video compression and transmission. It was established in 1988 by the initiative of Hiroshi Yasuda (Nippon Telegraph and Telephone) and Leonardo Chiariglione, group Chair since its foundation. The first MPEG meeting was in May 1988 in Ottawa, Canada. As of late 2005, MPEG has grown to include approximately 350 members per meeting from various industries, universities, and research institutions. 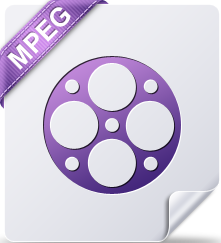 1-  MPEG-1 (1993): Coding of moving pictures and associated audio for digital storage media at up to about 1.5 Mbit/s. It’s the first MPEG compression standard for audio and video. It was basically designed to allow moving pictures and sound to be encoded into the bitrate of a Compact Disc. It can be used on Video CD, DVD Video or digital satellite/cable TV services.