“Matroska is designed with the future in mind.”

The Matroska Multimedia Container is a free open source multimedia container format; it functions as a container that can hold many different codecs at the same time. As the name implies (the Russian egg-shaped dolls contained within one another) Matroska can contain video (DivX, Xvid, RV9, etc), sound (MP3, MP2, OGG, AC3, AAC, DTS, PCM), as well as subtitles (SRT, ASS, SSA, USF, etc) in the same file. The aim of developing Matroska was to provide a flexible and cross-platform alternative to AVI, ASF, MP4, MPG, MOV, and RM. Its main features include fast seeking, high error recovery, modularly extendable, selectable subtitle and audio streams, chapter entries, menus, and streamable over the internet.

This format, with the file extension of ‘.mkv’, is based on EBML (Extensible Binary Meta Language), which allows changes to be made easily if need be, without breaking old file supports. This is why it is said that “Matroska is designed with the future in mind”. 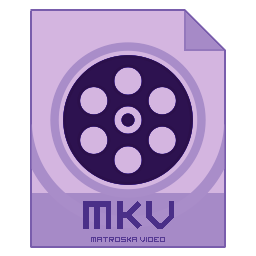 "What is .mkv file? I thought I downloaded a movie, but when I got the file it is a .mkv. I don't have anything that will play the file."

Yes, Matroska is rapidly gaining ground as a popular video format mainly because of its advanced features. There is just one hitch - there is no standalone hardware player that is capable of playing MKV files. Hence, it often becomes necessary to convert MKV files to MPEG1 VCDs or MPEG2 DVDs.